Mistress BlackDiamoond was streaming her punishment of this loser to teach her students how to brutally punish a slave. She took a tiny balls and she threw it hard at the slave's balls. She had tied the slave up so he was defenseless. She used the balls to crush his balls and he cried in pain. The worst part was he could see the ball coming but could do nothing about it.

Mistress Gaia started by teasing this guy. She was meant to humiliate him but she did not want him know. She teased him then she gave him a foot job. He relaxed completely and knew they would have fun. But then she told him to stand up and she kicked him in the balls. She did so repeatedly and he wondered why she was torturing him after she had given him a foot job.

Lady Karame was not happy with her slave. She wanted to punish him for the way he had been rude to her visitors. She did not want her friends to think that she was not in charge in her own home. So tied nipple clamps on the slave and she pulled them and he cried in pain. She also crushed his balls and his cock and she trampled on them cruelly to teach him a lesson.

Mistress BlackDiamoond loves to put slaves in a lot of pain to teach them a lesson. She always does this immediately she gets a slave so as to send a message. Usually, the slaves learn their lessons and they never mess up for the entire duration they are with her. She had a new slave and he had to undergo the same. She made him spread his legs and she hit his balls with a ball.

Mistress Gaia waited for her slave to arrive from where she had sent him. His mission had not been successful as he had not done all she had told him. His punishment was simple and he knew it when he came. He had to be punished and he had to be crushed. What he did not know was where he would be crushed. The mistress opted to crush his balls.

Lady Karame wanted to see what her slave does when he is in pain. So she forced him to undress and she tied him up. She then used a vice to lock his balls and crushed them painfully. She even whipped his balls and used her high heels to kick and crush them as well. The slave had never felt so much pain before and he cried like a little kid.

Mistress tortures guy by ballbusting him

This mistress had mad beef with this guy and she made sure she taught him a lesson he would never forget in his entire life. She tied him up with his hands hoisted up. She then tied his legs apart as well and made sure he was naked before tying him up. Then she kicked him in the balls and humiliated him till he cried and bagged her to stop.

Mistress BlackDiamoond loves to torture guys. She does not care what they have done. Whether it is a small mistake or a big one, she will humiliate and torture them just the same. Today she called her two friends and they helped her torture and trample this loser. They used their boots to crush his balls and inflict untold pain on the loser. He had no choice but to endure the pain.

Mistress Luciana hated this guy with a passion. She had chosen to let things slide but he came for round two. He had conned her and now was coming to spoil her name. He thought she was not able to defend herself. She lured him to her house where she surprised him by torturing him. She forced him to undress and she tied a bucket with what on his balls and made him walk. 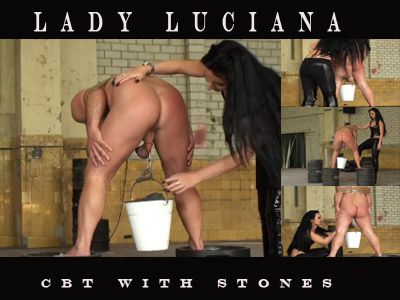 Mistress Harley did not like the fact that this loser who wanted to seduce her was broke. She does not mess with broke guys and he had to know that. She tried to send him a subtle message but he did not seem to get it. She decided to make him stop following and bothering her. So she ballbusted him. She crushed his balls so hard and when she was done with him, she knew he would never waste her time again.