All articles tagged with "Cock And Ball Busting"

Mistress BlackDiamoond and her friend hunted this guy down and punished him for what he had done to their friend. He had started rumors about her and extorted a lot of money from her. They made him own the rumors and give her money back by trampling and kicking his balls and his cock. By the time the mistresses were done with him, he was in more pain than he had ever felt in his life.

Lady Alshari did not want to be left behind the cock and ball torture craze. So she got a new slave to torture because she did not want to punish her slave that much as he had not done anything to deserve such treatment. She got a slave and she made him bend and she kicked him hard in the nuts. She also kicked his balls and crushed the two before letting him go. 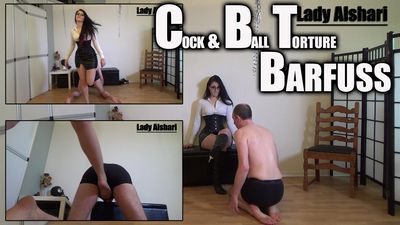 Mistress Megan was showing her friends how to humiliate and degrade a slave. Today she was showing them how to be brutal and she had to do it practically. She wanted them to do what she told them so she brought a slave and enjoyed watching them kick the cock and crush the balls of the slaves exactly as she had told them to do and in some instances even better than she had taught them.

When Megan was told what this slave had done, she could not believe it. She called her friend and together they asked the slave and he agreed to doing it. They were so mad at him and decided to make him pay for his mistakes. They made him remove his boxer and his pants then they kicked him hard in the balls as well as kicked his cock till he was numb from pain.

This guy likes to wear female clothes. Lady Vampira found him with her clothes and she was mad. She could not let it go and sought to punish him. She took him outside while he was wearing her corset. Then she made him kneel down and started kicking his cock and his balls so that they could shrink and get inside his body to form a cunt since he wanted to be a woman.

If you want to see someone being abused, you need not look any further. Megans and Lacy do it perfectly in this video. They kick this loser hard in the balls and abuse him cruelly

When it comes to being cruel, few mistresses can match this one. She tied this guy's balls with a string and pulled it hard 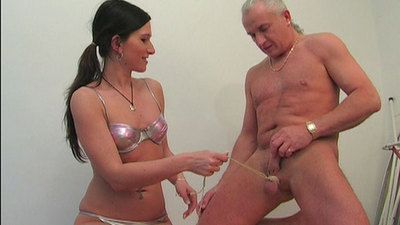 The sound of a man in pain and crying is music to this mistress's ears. For no reason at all, she kicked and ball busted this slave just so she could hear him cry out in pain

Mistress forces confession out of guy

This mistress suspected that this guy was up to something and she wanted a confession. When it was not forthcoming, she forced it out of him with her hard kicking and ball busting. She abused him and crushed his balls till he spilled the beans.

Madison teaches students how to be brutal

Madison wanted to show her students how to properly ballbust and hard kick a slave. She went hard on him and crushed his nuts with her painful kicks